The Biden-Harris administration took office in a turbulent time amidst cascading global challenges. The health and socioeconomic impacts of COVID-19 have deepened already-existing inequalities and reversed hard-fought development and humanitarian gains from the past decades. Mounting great power competition, climate change, and the increasing concentration of the world’s poor in fragile states, all require an effective, coordinated global response. America’s political and moral leadership is needed on the global stage now more than ever.

The Modernizing Foreign Assistance Network (MFAN) released a set of recommendations for the new administration to confront these challenges and continue building on years of bipartisan reforms to make foreign assistance more effective. This will require robust levels of U.S. foreign assistance with a commitment to transparency, country ownership, localization, and civil society strengthening, as well as an emphasis on the promotion of gender equality and social equity.

Now after 100 days, MFAN is assessing actions taken by the White House against our recommendations and we see mixed results.

On the 100th day mark, the Senate confirmed Samantha Power for U.S. Agency for International Development (USAID) Administrator and she has been sworn into office. President Biden announced this nomination before his inauguration in January – the earliest announcement of an Administrator of USAID since the agency was created. Equally exciting was the announcement that the USAID Administrator would be elevated to be a permanent member of the National Security Council (NSC), a clear signal of the importance of development and humanitarian considerations in all national security decision-making. Similarly necessary for whole-of-government coordination, Biden also appointed Linda Etim to be the NSC Senior Director for Development and Humanitarian Affairs.

Despite the early success of having the USAID administrator in place, and naming several Deputy Assistant Administrators, the President has left nominations pending for a slate of the top, Senate confirmed leadership positions at the development agencies. Nominees at the Development Finance Corporation (DFC), Millennium Challenge Corporation (MCC), and President’s Emergency Plan for AIDS Relief (PEPFAR) are all still unannounced. The President should also nominate the full slate of Senate-confirmed positions at USAID to empower the agency’s leadership, as well as the next level of leadership within USAID, which do not require Senate confirmation.

In other major advances early in the administration, President Biden recommitted to international cooperation by rejoining the Paris Agreement on climate change and UN bodies including announcing an intention to rejoin the UN Human Rights Council, and cancelling the U.S. withdrawal from the World Health Organization (WHO). Vice President Harris spoke at the Commission on the Status of Women (CSW), the highest-level representative the U.S. has ever sent to deliver the U.S. statement at this annual global forum and intergovernmental process mandated to assess government commitments to gender equality.

Moreover, the President’s National Security Directive – 1, “National Security Memorandum on United States Global Leadership to Strengthen the International COVID-19 Response and to Advance Global Health Security and Biological Preparedness,” released his first day in office, signaled a commitment to global engagement with additional financial resources. The American Rescue Plan (ARP) for COVID-19 relief, passed by Congress in March, included $11.8 billion USD for international assistance. The President’s Budget Request for fiscal year 2022 includes a 12% increase in the international affairs budget to boost U.S. global engagement, including significant financial commitments to multilateral climate institutions. Additionally, the administration has demonstrated a commitment to improving access to life-saving humanitarian assistance through funding and/or Disaster Assistance Response Teams (DART) deployment in crises including Yemen, the Tigray region of Ethiopia, and the Northern Triangle. Lacking in President Biden’s priorities, however, has been a public recommitment to the Sustainable Development Goals (SDGs). Agreed upon by the global community in 2015, the SDGs are used as a blueprint by many donor and developing countries alike to assess progress on key development targets set for 2030.

MFAN has summarized the 100-day progress of the Biden-Harris Administration into this Scorecard: 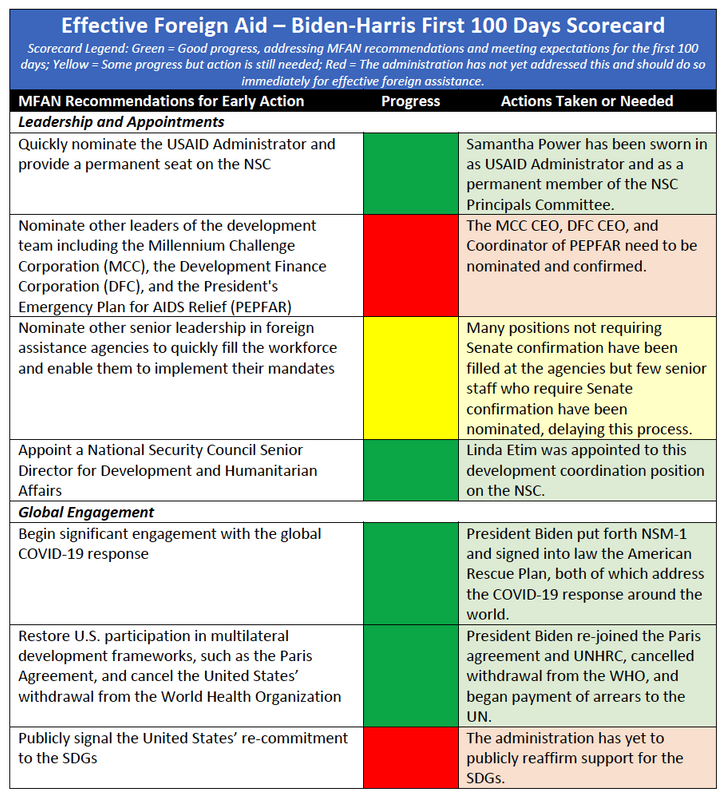 Now that Administrator Power is in place, we hope she will recommit to and build on the structural reforms of the USAID Transformation initiated by Administrator Mark Green, continuing a bipartisan legacy on foreign aid effectiveness. Prioritizing these internal agency reforms – including on structures, processes, and workforce – is essential for the effective and timely use of increased foreign assistance funding.

The establishment of the Policy, Resources, and Performance Bureau (PRP) was submitted to Congress for approval months ago but still has not been cleared by the required committees, and the administration has provided no indication of how it intends to proceed with this part of the re-organization. MFAN considers the re-uniting of these three areas as critical to effectively aligning USAID’s policy and budget functions for optimal effectiveness.

On progress for a well-prepared workforce, MFAN welcomes the Biden administration’s reversal of the prior administration’s halt on diversity, equity, and inclusion (DEI) trainings, and their commitment to analyzing whether U.S. policies are achieving DEI goals overseas and domestically. For example, USAID is also undergoing a comprehensive review of agency policies put in place during the last administration, including the 2020 USAID “Gender Equality and Women’s Empowerment” policy, to ensure alignment with the policy of the new administration.

MFAN is encouraged by the early progress and commitment to effective global development displayed by the Biden-Harris administration thus far. While robust funding of foreign assistance is crucial, it should be pursued in line with aid effectiveness principles, including funding flexibility, alignment with country strategies, data transparency, gender analysis, a robust evaluation and learning agenda, and a diverse and well-equipped workforce.

Important work remains, as many of the needed aid reforms and programming are yet to be fully realized. The impact of U.S. development and humanitarian programs can be most effective when all of the major development agencies have confirmed leadership in place and working together. The multitude of global challenges, compounded by the COVID-19 crisis, will require it.